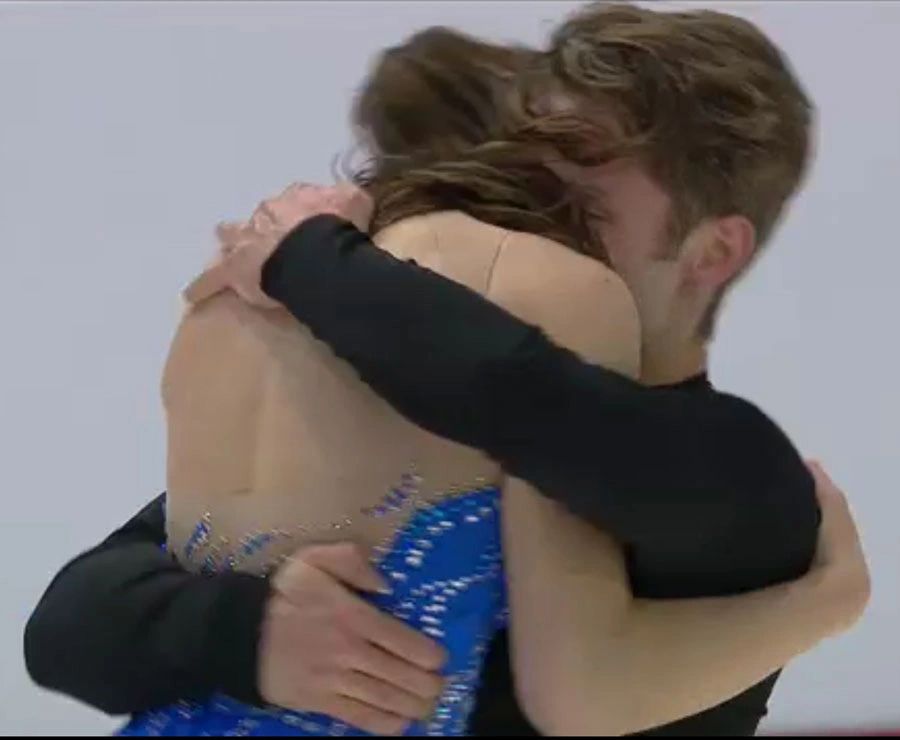 Mississauga, On: As Evelyn Walsh and Trennt Michaud sat waiting for their final score at the Canadian Tire National Skating Championships the camera panned the crowd at the Paramount Fine Foods Centre, on their feet in ovation for the performance they just witnessed. Among the standing salute was Olympic and World champion Scott Moir, who quickly motioned the camera to return to the performers. It was their moment.

Skating to a hauntingly beautiful cover of the U2 hit ‘One,’ choreographed by two-time world champion and Olympic gold medalist Eric Radford, the dynamic-duo who train in Brantford with coach Alison Purkiss at the Wayne Gretzky Sports Centre mesmerized the audience, live and across the nation on TSN. 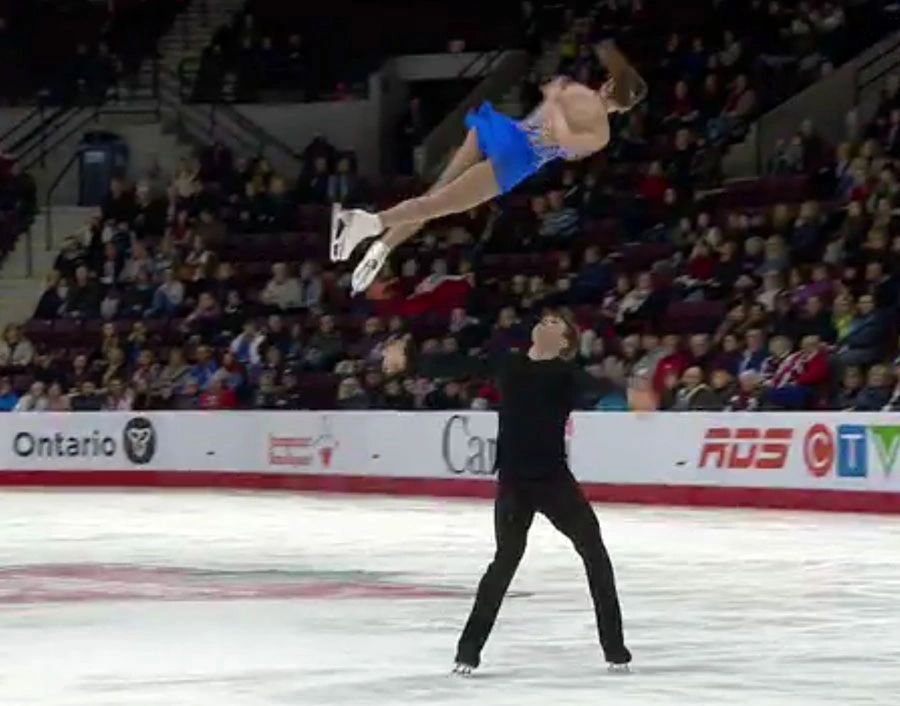 Walsh and Michaud earned high marks for their technical and artistic performance and brought the crowd at the Paramount Fine Foods Centre to their feet in Mississauga.

“What a beautiful program,” said TSN broadcaster Tracy Wilson, a seven-time Canadian ice dance champion. The skating duo were visibly thrilled with their achievement as they embraced to the sound of thunderous applause following the programs end. Skating to the Canadian Tire Skate Canada lounge to await their scores Evelyn hugged coach Andrew Evans and said, “We did it… We made a good comeback.”

The judges rewarded Walsh and Michaud with high marks for technical and artistic performance, propelling them to the top of the score board with just two pairs remaining in the contest. Tracy Wilson framed the moment with this comment, “I am amazed at the improvement these two have made. They got off to an awful start this season. Coach Alison Purkiss said they carried the weight of expectations from last year, making it to worlds. This competition was just all about bringing their best. That’s exactly what they did.” 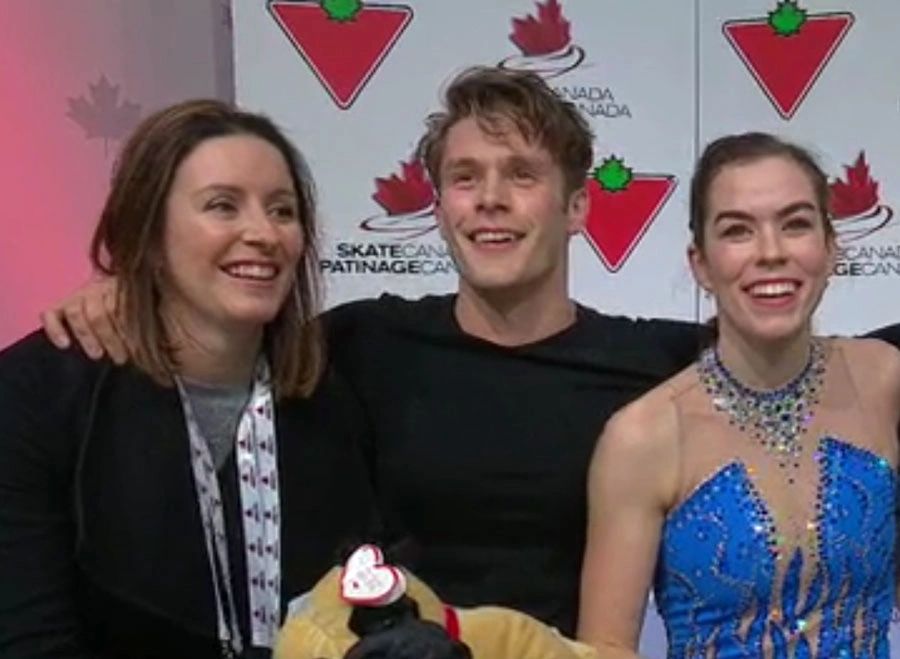 All smiles in the skaters lounge awaiting their final scores, coach Alison Purkiss along with Trennt Michaud, Evelyn Walsh and coach Andrew Evans (not shown) celebrate a great comeback performance.

The early part of the season was not kind to Walsh and Michaud. Coming off a 12th place finish at the 2019 world championships, a schedule of international competitions through summer and fall saw them miss the podium and raised questions about their ability to find the rhythm they had in early 2019. Returning to competitions in Canada the pair gained momentum with strong performances, including a gold medal victory in Alberta at the 2020 Skate Canada Challenge at the end of November.

Having started the night in third, Walsh and Michaud watched as their score held up over second-ranked Lubov Ilyushechkina and Charlie Bilodeau after the Quebec-based pair faltered on key elements. The final performance of the night would be the gold medal winner, as defending national champions Kirsten Moore-Towers and Michael Marinaro powered to a score of 215.67 to claim their second consecutive national title. This is the second-consecutive year that Walsh and Michaud have earned silver medal honours at Canada’s national competition. 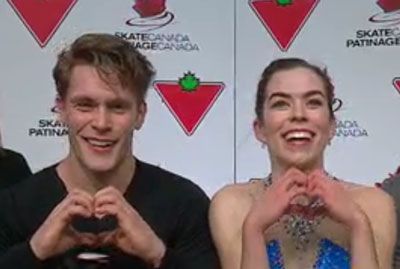 The next major skating event will be in late March, when Montreal hosts the 2020 ISU World Figure Skating Championships. Pairs competition will begin on Wednesday, March 18th.

Walsh and Michaud will join national champions Patricia Andrew, Zachary Daleman, Lily Wilberforce and Aidan Wright in Brantford’s annual spectacle-on-ice “Flashing Blades” on Saturday April 11. Hosted by the Brant Skating Club at the Brantford Civic Centre, the 70th annual performance will celebrate 70 Years on Ice and feature performances to a mix of pop hits from the past seven decades, as well as hits from the classic film Mary Poppins. Details and ticket information is available online at www.FlashingBlades.ca 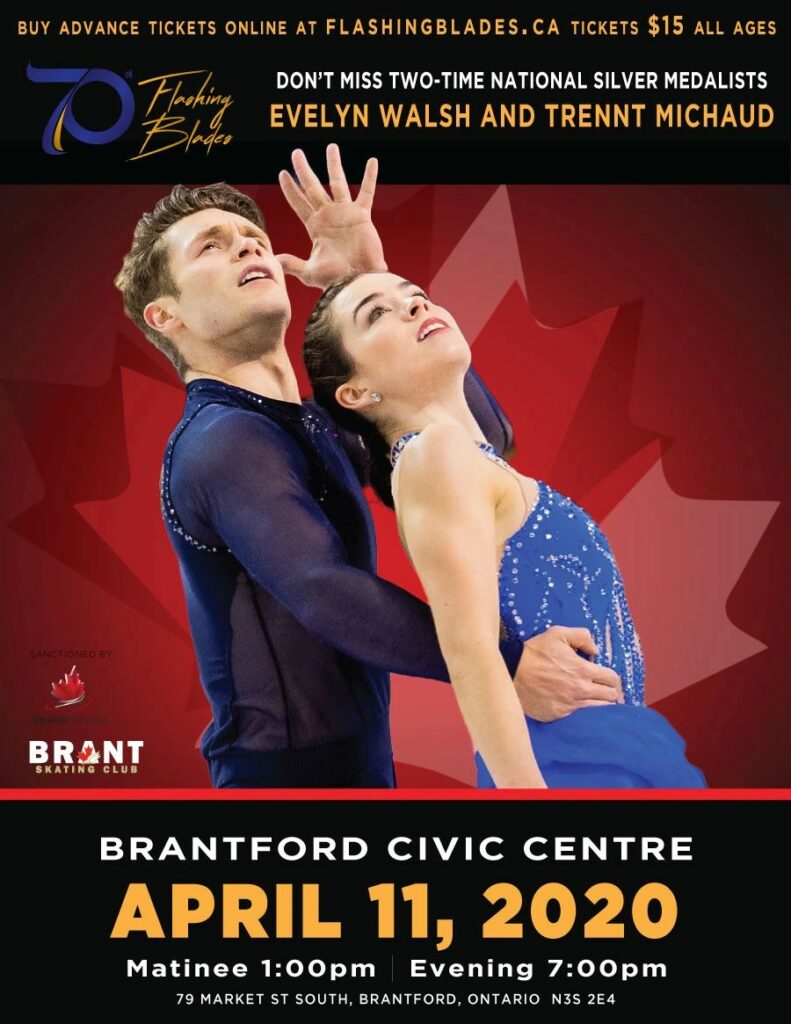 HOW CAN WE HELP YOU?

Looking for someone in particular?

Our board members and volunteers are here to help make your experience The Best.